Breaking – Anki Vector SDK Python News. Anki has announced the Vector SDK which will be in Python. The Vector is a big upgrade from Cozmo in many respects.

Update Dec 11 2018 – The Alpha Anki Vector SDK is now available to everyone. We’ve already got some content up using the SDK, and now that we have the big update, we’ll be writing a lot more.

Anki Vector Examples, Tutorials, and Projects With the Vector SDK in Python

There is one thing to quick clarify since I seem to get this a lot. There is currently no Anki Vector API. What Anki made is an SDK. An API is a Application Program Interface, while an SDK is a Software Development Kit. Regardless, you’re in the right place!

If you loved Cozmo, it looks like you’re going to love Vector even more.

What are the differences between Anki’s Vector and Cozmo?

While we don’t have a ton of details on the differences between Vector and Cozmo yet, here is what we know so far. 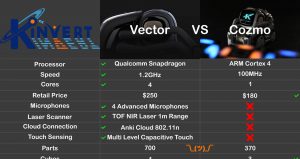 CLICK ON IMAGE ABOVE FOR INTERACTIVE VECTOR VS COZMO COMPARISON CHART

We go more in depth with the similarities and differences between Cozmo and Vector in our definitive Anki Vector Vs Cozmo article.

What’s Inside Vector – How He’s Different From Cozmo

We will be updating this section soon. Anki just opened up the SDK to everyone today.

I will keep you guys posted as more information comes in. We intend to make a more thorough installation portion soon. This was just released 2 hours ago at the time I’m writing this.

We’re staying on top of the news with the Anki Vector SDK so check back often.

Anki says that the Vector SDK will include: 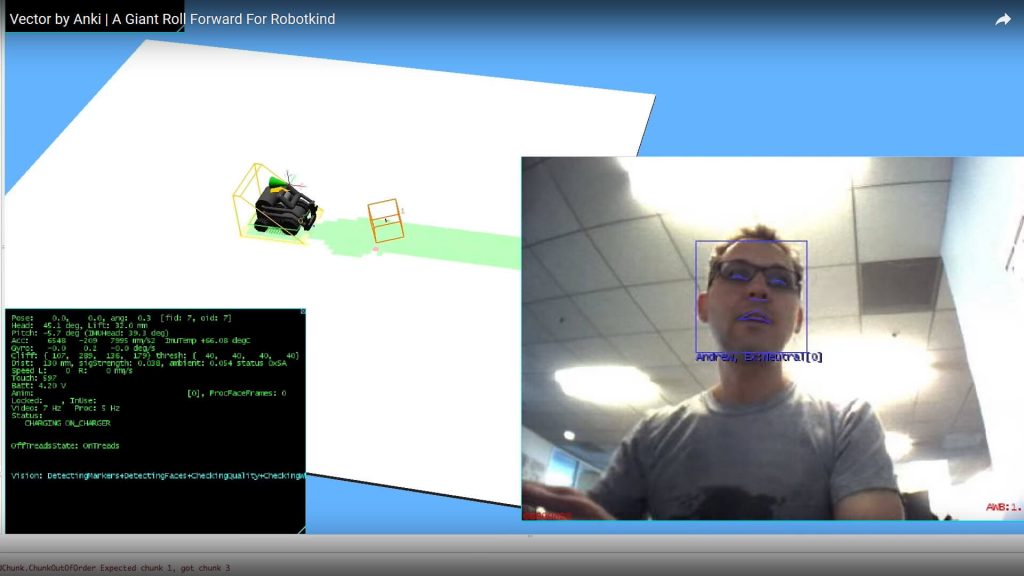 What We Know About Anki Vector SDK From Videos

It looks like Poses remain very similar. Some of us have put a lot of work in to solid navigation and Poses were a big part of that. So it looks like a fair bit of code should carry over.

We see that like with Cozmo, we know where the head and lift are.

Accelerometer and Gyro information are a must and of course we get that.

Interestingly here we seem to get int values for the four drop sensors. I think this Cliff section is showing the sensor values for all four Drop Sensors.

Perhaps we also get control of these thresholding values. These are what will essentially tell Vector to trigger a cliff event. If the cliff value for one of those four sensors drops below that threshold (40) you’ll be warned and driving will likely be interrupted.

One of the most important additions to the Vector SDK is the distance sensor. Here we see the nearest object is 130mm away. Since these are on the same line I think the sigStrength and ambient are also related. This could indicate that the Vector SDK will be capable of getting a feel for how reflective the surface is that Vector is facing.

Anki Vector SDK and OpenGL – What to Expect

In general use – don’t expect what you see above. I’ll have an image up that will more accurately show what you’ll probably see from the OpenGL 3D Viewer in the Vector SDK.

The image before this fancy one with the laptop – the one that shows facial recognition – is probably more like what you’ll see.

That said, this could be possible with a lot of work creating objects in OpenGL. But these objects weren’t observed and built with point cloud and image data. This was a construction to make an interesting 3D world.

Not knocking it. This is totally possible. But most people won’t bother unless they’re in to animation or something.

In reality the OpenGL 3d_viewer in the Vector SDK will show a 3D view of Vector, where it is and is not safe to drive, and where his cube is.

There may be more we don’t know yet. Perhaps this telemetry window will be standard and the coders won’t have to create it themselves.

If there are any big improvements over the old 3d_viewer please let me know. For now I’m personally expecting it to be pretty similar as in the Cozmo SDK.

Why the Anki Vector SDK is a Big Deal

We talked before about the Anki Cozmo SDK in Python. That was a big deal then. From what I hear the Anki Vector Python SDK will blow it out of the water.

Some of the things that stand out from an educator of young budding coders:

We just got an update about the Anki Vector SDK.

First of all, they currently have the working prototype up. Not all of the API calls are there yet, but they can currently get Vector to react to the SDK. Great news!

Between now and the release of the Anki Vector SDK Alpha, they’ll be adding more API calls. This means we’ll get more control over Vector. Since the SDK is still under development they need to add in each function. For example they may have the API calls for Vector to be able to say “Hello World” or any other string. However they may not have gotten the SDK to do accurate drives using the dead reckoning built in to Vector.

They are also working on the documentation. This is very important especially for beginners so you can understand what functions you can call and what they will do.

More good news. They will be releasing Anki Vector SDK Python examples. They are working on those as well.

Be sure to add this to your calendar. On Aug 30 they will be having another live stream at 2PM PT about the camera in Vector.

Another big one – YES, Vector will support Custom Markers. This is great news! 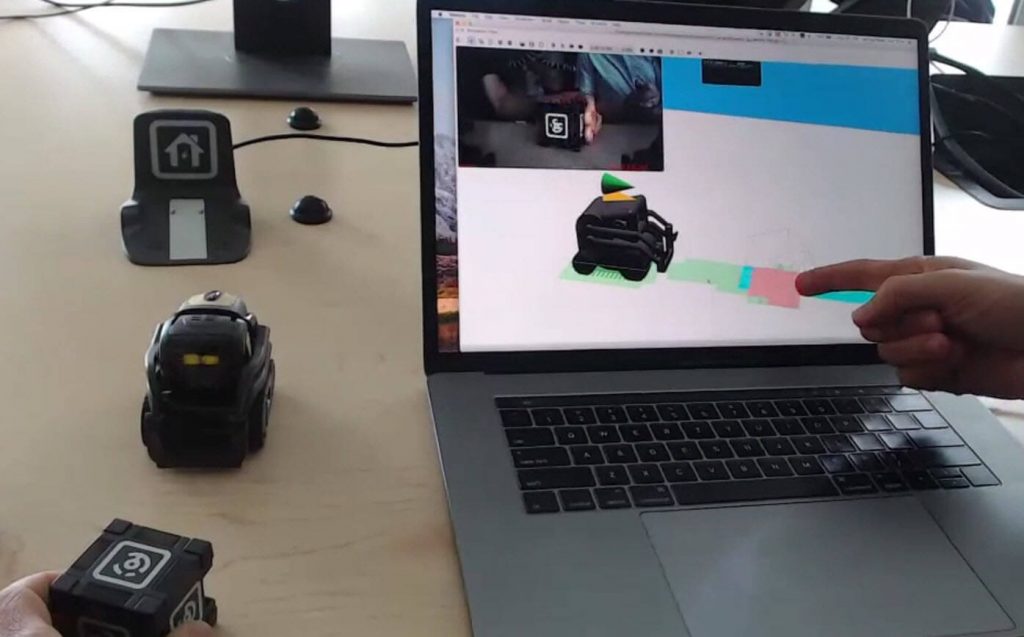 Several updates from the livestream on Kickstarter today.

They project the SDK to be available to backers in December.

The camera in Vector is a wider angle than that of Cozmo.

There will indeed be Custom Markers in the Vector SDK. This is great news.

We got a better view of the live capabilities of the computer vision engine. The video stream appeared smooth and facial recognition was pretty good. 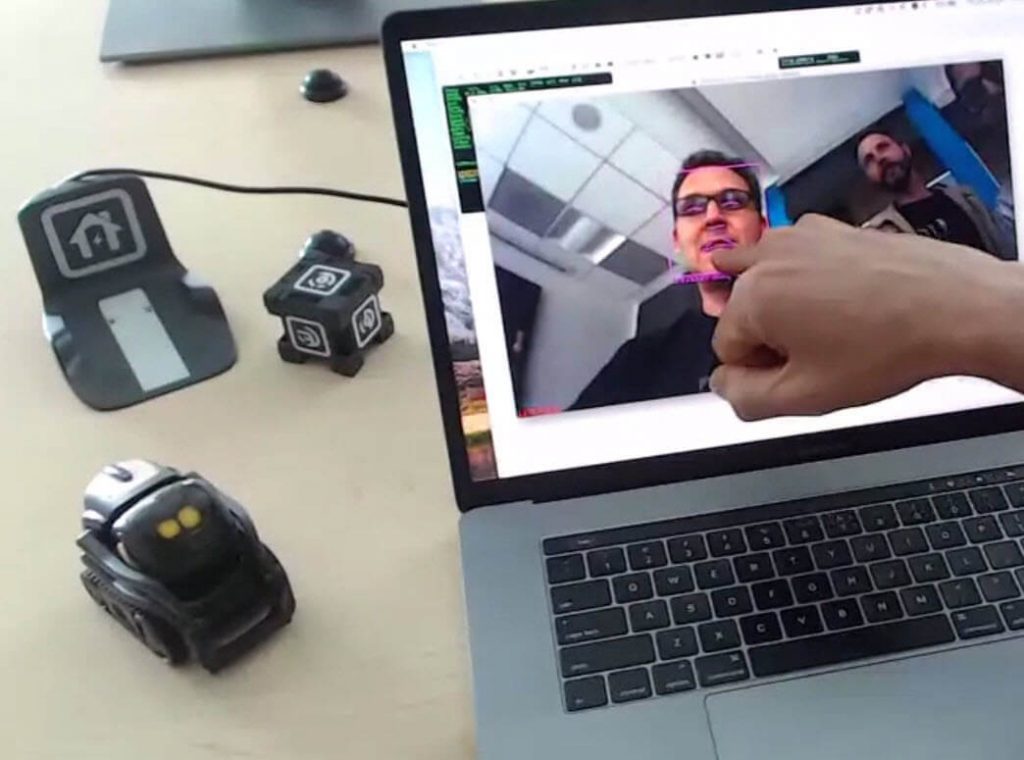 Interesting news as well. The guy in the livestream today was the TA of at least one of the founders of Anki. I didn’t know that before today.

Vector is about to ship to Kickstarter backers. If you’re a backer check your email. You likely have tracking info in your inbox.

We have a ton of Cozmo Examples, Tutorials, and Projects to look at for ideas about what to do with Vector.

Interested in robotics projects that don’t use Cozmo or Vector? Check out our Ultimate Guide to Robotics Projects and Ideas.

Does this look a bit over your head? Check out our Ultimate Guide to Block Coding. Cozmo can be programmed in a much simpler way and it’s a good stepping stone to understanding typed programming. Also you can read about What is Robotics.

Let us know below. We’d especially like to know any information we don’t have yet. We’re trying to get a central source of the most up to date information on the new and exciting Anki Vector 🙂

Want to stay up to date with Cozmo and Vector news and tips? For example the third email talks about the special type of battery in Vector’s cube and how to replace it.