In this Ultimate Guide to Robot Dinosaurs we’ll talk about all kinds of dino robots. From toys to lifesize exhibits. Which to buy and how to build your own.

As a kid, I always loved dinosaurs and robots. However robotic dinosaur toys weren’t a thing back then. What a wonderful age we now live in.

Not only can you find some good robot dinosaurs, with new affordable tools you can also make your own.

Yet it doesn’t stop there. More museums and zoos are beginning to have life size animatronic robot dinosaurs. There is also a tour you may have heard of called Walking With Dinosaurs.

The one thing that remains basically the same is those huge car eating hydraulic robot dinosaurs.

Here is the outline to our Ultimate Guide to Robot Dinosaurs:

Which 3 robot dinosaur toys do we recommend, and which should you avoid like the plague?

We will end up writing a dedicated article to this topic in the near future. For now, let’s dive in.

I don’t consider most of these to be educational. If you’re looking for robots that are both fun and educational, check out Best STEM Gifts for Kids – Educational Toys.

The most educational I’ve seen is the Meccano Meccasaur. It’s a dinosaur robot you actually build. I think you’ll get more out of the construction of the robot than playing with it. But that said, it can do several things. Disclaimer – I know the guy that designed this robot for Spin Master’s Meccano company.

That’s the only one I know of that I consider educational. Not let’s look at the rest.

The best robot dinosaur toy currently on the market is Miposaur. It doesn’t seem to break as much as the others, and does have some interesting technology in it. I don’t consider it to be educational but it looks like a lot of fun.

It has a ball to play with, which is cool.

4 Other Robot Dinosaurs to Consider

The last one is the Yeezee Wireless Dinosaur. It seems to be targeted at younger kids and seems to get reasonably good reviews.

The Dinosaur Robot Toys to Avoid

WowWee Untamed – These things have pretty terrible reviews and seem to have little to no functionality. I highly suspect they will quickly begin collecting dust.

WowWee Roboraptor Remote Control – This thing is a walker and doesn’t work too well. The remote control is also very difficult to use. Not in a challenging way but because it has to be close to the robot and pointing at it at all times. Just not well made.

WowWee Miposaur Mini RC – Do not mistake this for the real Miposaur! This one is tiny, doesn’t come with the ball, and can only be driven. It does not interact with it’s surroundings.

Zooawa Remove Control Robotic Dinosaur – Maybe they’ll come out with a better version but for now I just don’t recommend this.

Not Quite a Robot

To an extend all Legos are educational since you’re at least building something. They do have a kit called Creator Mighty Dinosaurs. It looks like fun and is very affordable compared to the rest of the options.

How to Build a Robot Dinosaur

One option is to look again at the Meccano Meccasaur. That said, wouldn’t it be awesome to design and build your own?

Once again, we’ll be writing a more in depth stand alone article for this in the future.

Obviously if you’re going to build a robotic dinosaur I’d recommend making a small one.

Depending on size, probably your best bet will be to 3D Print the parts and do motion with servos.

You’ll need to decide if this will be the full robot, or for example just the neck and head.

Overall this will be the same process as making any other robot with a few key differences.

This is what drove me to write this article 🙂 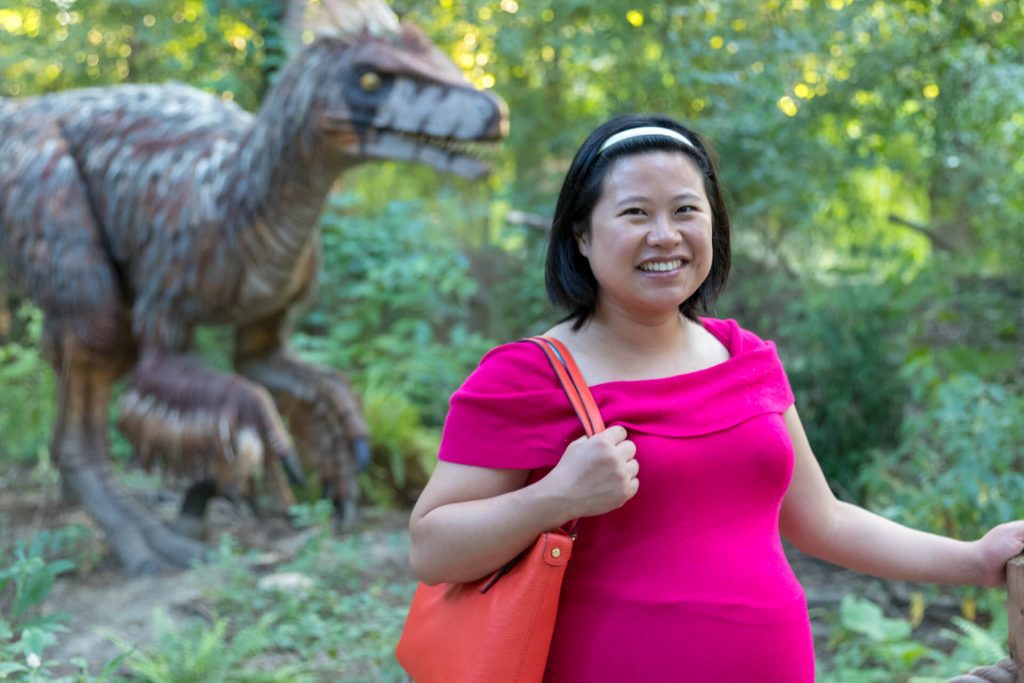 My wife is an Engineer and her company had a fun dinner event at the Detroit Zoo (baby is coming late Sept 2018 – she’s handling pregnancy like a boss). They have what I’m told is the biggest robot dinosaur exhibit in the US. I’ll admit my inner kid came out in full force. I decided then and there to write an article about this, then proceeded to take pictures I thought were cool but wouldn’t work great for the article :/ See how it looks like it’s going to eat her? Yes – I’m just a grown kid.

I can’t recommend enough to go check this sort of thing out. I’ll show you some cool videos, pictures, and help you hopefully find something like this close to you.

Where can you see life size robot dinosaurs?

If you’re interested in finding more exhibits check out https://www.imagineexhibitions.com/.

This is something we will probably write a lot more about in the future. 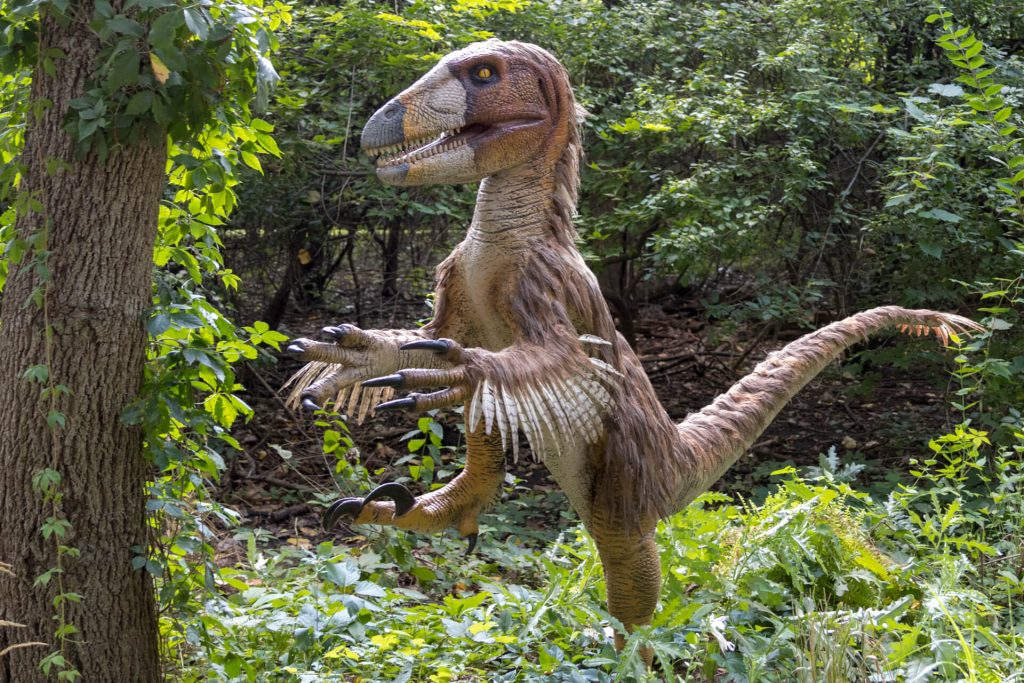 What did it take to make a robot dinosaur like the one above? A lot of work from people with skills in animatronics. Let’s briefly talk about what that is.

Animatronics is a branch of Robotics. For more info on robotics check out What is Robotics and our Ultimate Guide to Robotics Projects and Ideas.

What makes animatronics special compared to most branches of robotics is if focuses on animal shapes and movements. For example most robots don’t bother to move in an organic way. Animatronics needs to make sure the motion isn’t jerky or robotic looking. Animatronics tries to make their robots look like they aren’t robots.

Below are a few cool videos about animatronic dinosaurs.

www.youtube.com/watch?v=gLbkFyfXXl4 – Inside factory where robotic dinosaurs come to life

www.youtube.com/watch?v=okOVYWHnOMg – meh how it’s made

www.youtube.com/watch?v=vA_-rYwhVGI – Inner workings of a head and neck

You’ll see these at events such as monster trucks, county fairs, etc. They are a giant robot dinosaur that can tear apart a car.

Some even breath fire.

These are powered by hydraulics and built out of steel. They don’t have detailed skin with scales, and accurate movement. These are practically construction equipment made to resemble a dinosaur.

For more info on robotics check out What is Robotics and our Ultimate Guide to Robotics Projects and Ideas.

We also have a ton of information on robots that aren’t dinosaurs. You should definitely check these out:

If there is anything we missed, please let us know in the comments below.